A guide for the birder or naturalist embarking on a holiday in Mallorca with illustrations of the island by the author. It examines all parts of Mallorca with regional accounts from the Salinas de Levant’s saltpans in the south, to the northern Sierras and the coast and back lanes of Cala D’Or. Pat Bishop, with her late husband Eddie Watkinson, were honorary representatives of the RSPB on the island and were partly responsible for the setting up of the first nature reserve in the Albufera. 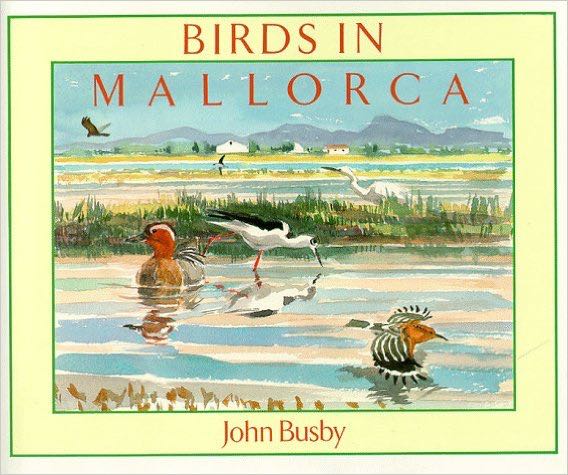 Anyone who has visited Mallorca will instantly be captivated by John Busby’s evocative drawings by A.A.K. Lancaster in British Birds Magazine 1989

“To use John Busby’s own words, this book came about through a desire to give the many friends that he met there ‘a book of visual memories’.

Anyone who has visited Mallorca will instantly be captivated by John Busby’s evocative drawings: a mere flick through the pages will release to the eye and memory instantly recognisable shapes and forms of rocky crag, patchwork fields, wooded slope and glassy seascapes. His birds are not in feather-by-feather detail, but are studies of movement and life. The text is Confined to personal observation of the island and its birds, of places known to many and of others less known.

This is a book for those who have savoured the delights of Mallorcan birding and wish to reminisce. Equally, it is for those who are contemplating such a trip: any qualms they may have with regard to the Holiday Brochure Package interpretation of Mallorca will soon vanish. It is not a substitute for the late Eddie Watkinson’s well-known Guide to Birdwatching in Mallorca, but a companion, and a visual memory bank.

I loved every page.”