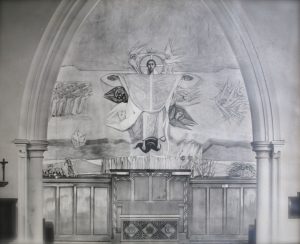 With the stained glass in the original East Window of St Columba’s in a very poor state of repair, the church considered three options: to repair the glass (at the huge cost of £500), to fill in the windows making a complete East wall for a mural or wooden cross, or to board over the glass and hang a canopy over the altar. The Rector, the Revd Mark Kemp, was very keen on a mural, others on a canopy, but cost was a serious issue as the church was struggling financially at the time1.

By May 1958 the church wardens had sent out an appeal for funds to everyone who had signed the visitors’ book and John Busby, a member of the congregation and a lecturer at the Edinburgh College of Art, was in the process of designing a mural. It was decided that drawings of designs for canopies and for murals should be put to the congregation in early June.

In June 1958 the decision was taken to go ahead with the mural, but works to fill in the window and provide a plaster skim over the whole wall took time, so it was not until after Easter 1959 that work on the mural began. The painting took several months to complete, longer than expected. The scaffolding tower covered a third of the wall, and had to be moved aside every time a clear view of progress was needed. During that summer John took time out to get married and go on honeymoon, and from September was teaching again at the Art College but on 13th December 1959 the finished mural was dedicated by Bishop Warner, ‘who rightly observed that it would add permanently to the fame of St Columba’s2. Two months later the Rector reported that ‘Mr Busby’s expenses for material amounted to £40. It was resolved to reimburse Mr Busby by this amount, plus an honorarium for value £50 at the earliest opportunity.3 The congregation recorded their appreciation of ‘the beautiful and striking mural painted by John Busby, which forms a real glorification of the sanctuary’4 at their AGM in February 1960.

St Columba’s by the Castle website has a brief history and a warm welcome for those who would like to view the mural.

In 2016 the church was opened specially concurrent with John’s Exhibition at the Royal Scottish Academy.