Published by Victor Gollancz 1982
Edited by John Busby, with an introduction and commentary. 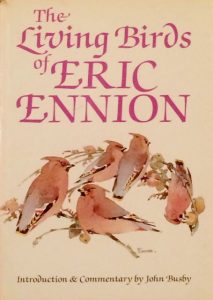 “Eric Ennion was a unique but not widely known genius of British wildlife painting. A Cambridgeshire doctor with a passion for nature, he gave up medicine to pioneer Field Study Centres and to write, to broadcast and above all, to draw and paint the birds he knew with a first-hand experience seldom equalled by any artist.”

This book shows a selection of the beautiful studies and field sketches kept by Eric Ennion as references for his larger paintings, as well as illustrations and descriptive extracts from some of his articles and books. He always hoped that people would learn to see and enjoy birds as they really are, rather than as artist’s book-plates [as in field guides]; now, through his own eyes and brush, this is just what we are able to do.”

The book focuses on field sketches from the 1930’s to the 1970’s and working drawings and preparatory studies for paintings. Includes many of the composite plates Eric Ennion prepared for the unpublished Bird Man’s River, and plates from The British Bird reproduced in full-colour. Passages of descriptive text are taken from Eric Ennion’s books and articles; includes notes on sketching birds taken from unpublished manuscripts.

The Waxwings on the dust jacket were painted for the back cover of Bird Study in a Garden.

128 pages. Illustrated throughout in colour and black-and-white. Bibliography compiled by Robert Gillmor.

[Ennion] was second to none, showing with the minimum use of materials, but maximum effect, all the postures and many moods that a bird in its natural surroundings can produce. The October 1982 edition of British Birds magazine carried this review by Norman Arlott

It was with great delight that I approached the act of reviewing this aptly titled book, although – it was not many years ago that I looked upon Ennion’s work as simple ‘kids’ stuff. I then rated it well below that of the many artists who painted their birds to a high-gloss finish, showing every feather in meticulous detail. Fine brushwork, yes, but I realised after more field experience that their works lacked a certain something: life! It was then, with little hints from my mentors, that I took a second look at the likes of Ennion: artists who could sketch, and not just sketch the shape of a bird, but include within that shape all the freedom and vitality of the bird in the wild. This Ennion did, and, in his portrayal, be it a quick pencil drawing, a slightly more elaborate line-wash sketch or a finished painting, he was second to none, showing with the minimum use of materials, but maximum effect, all the postures and many moods that a bird in its natural surroundings can produce.

This new book, with a fine introduction and commentary by John Busby, shows to great effect all of Ennion’s skill in putting on paper that which he observed, not only with the artist’s tools but also with the writer’s, for he was most accomplished with the written word as well as being a top grade artist.

Split into eight sections, plus a bibliography and chronology, the book covers his work on waterbirds (including eight pages on ducks), terns and gulls, waders, woodland birds, open country and garden birds, game birds, and birds of prey. Although probably favouring the water and waterside birds, his work did not waver when away from this habitat, birds at open moorland or a woodland edge being equally well transferred from his observant eye to the page. A quick glance through the sections proves this: wash and line sketches of herons preening and Wigeon at rest and feeding from the waterbird section are on a par with a page of flycatchers from the woodland section. In fact, the flycatcher sketches are a perfect example of how great an observer of bird life he was. Apart from the bird in hovering flight (noted by Busby in the commentary) the portrait of two birds preening and wing stretching, actions that were probably quite rapid, are captured in a superbly accurate and naturally balanced cameo.

The last section of the book deals with the drawing and painting of birds, using the few notes that he had compiled before his death for a book on that subject (unfortunately it will never be published; many of his thoughts on the matter were kept in his head and never written down). Those that are available provide aspiring artists with sound, knowledgeable reasonings.

‘Birds are not hypotheses: they are alive, very much alive, and not to be shorn of personality, not to be plucked from their surroundings.’ This sentence, included in the book, and taken from Ennion’s Book The British Bird, says it all. He practised what he preached and this new book confirms it. Perhaps there should have been more of his completed paintings; but never mind, what there is between these pages is a treasure. I thoroughly recommend it to all, artistically inclined or not: it is as near as one can get to one’s own field observations.

FREE postage to the UK for original pictures in the shop from now to the end of December (calculated automatically) . Dismiss