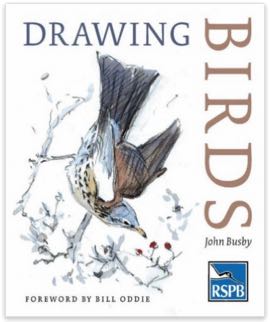 A couple of days ago, a package came in the mail which contained a very thoughtful gift for me from my husband: a copy of Drawing Birds by the British wildlife artist John Busby. It’s now the second book of Busby’s I own, and now both are special to me.

It seems like Busby’s work is harder to come by in the US and it’s pretty much impossible to find a copy of either work for less than $20, even used, so I’d like to share my thoughts on them.

So first, the info:

Both books are similar in paperback format: thin, square-ish shape, perfect binding, heavy, glossy paper and lots of full-color illustrations. Both, but particularly Looking at Birds, tend to be heavier on illustrations than text.

The title Drawing Birds seems pretty straightforward, but is probably best read in the context of Looking at Birds. For Busby, the acts of looking and drawing are inseparable. If the title of the latter hadn’t tipped you off, it’s about the art of going out into the field and looking at the birds rather than identifying or photographing them (or even drawing them–but I’ll get to that later.) And this is the sense in which Drawing Birds is meant, as well. It’s not a book about how to produce a picture that someone will come along and recognize as a representation of a bird; it’s about the act of going out into the field and drawing real, live birds. The difference is subtle, but I think it’s a real key to understanding the intent of the book. There are some beautifully detailed and polished portraits featured in Drawing Birds, but by and large it features either field work or rather impressionistic studio work. The product of your observation (that is, the drawing) is secondary to the importance of having seen and observed closely. In Busby’s view, the only good bird drawings are those that come from having observed a bird in its habitat.

Accordingly, the book is short on step-by-step techniques for drawing birds. It provides inspiration and general ideas, but it is not a how-to book. Instead, the text of the book is aimed at helping you make sense of what you see when looking at a bird in motion so you will know how to draw it accurately. I personally don’t see this lack of as a weakness, but if you’re looking for a guide to help you draw finished, detailed bird portraits, this is not your book. But it’s important to note that this lack of instruction is deliberate on Busby’s part. Near the beginning of the book, he says, “Over the years of teaching at an art college I know that despite my advice and stage-managed exercises, the students have largely taught themselves through much practice and experiment [. . .].” (25) If you want more concrete instruction, though, I recommend the excellent Laws Guide to Drawing Birds. Its author John Muir Laws is definitely influenced by Busby, but breaks down the process of drawing a bird into many detailed, concrete steps.

It is actually through John Muir Laws that I know about Busby’s work at all. While I was in the UK last February and March, I was on the lookout for Looking at Birds but I only knew the book existed because Laws reviewed it on his site a while ago. I looked for it in all the bookstores I went to in London, Reading, Bath, and Oxford. No dice. After a while, I just gave up and resigned myself to having to buy a copy off the internet when I was home.

Near the end of my trip, I went to Edinburgh. As I arrived on the 27th of February and my rail pass was going to expire after the 28th, I decided to spend the day at North Berwick, a town about 30 minutes east of Edinburgh by train. The draw to go there was the presence of the Scottish Seabird Centre. As it turns out, I didn’t really do much at the at the Centre itself, but I did stick my head in the gift shop early in the day to scope out some gifts for friends. And there it was! Looking at Birds sitting right there on the shelf. I picked it up and flipped through it. Hmmm. It was thinner than I had been expecting. Hmmm. There wasn’t that much text. Hmmm. At the time, I’d heard a lot about Busby’s art, but had never really seen any of it. It looked really sketchy and unfinished. Then I turned the book over–15 pounds! That’s $25, a lot to pay for a flimsy paperback book. But I also got the sense that if I did not buy this book now, I would never see it sitting on the shelf of a bookstore for the rest of my life, and, in all honestly, would probably never buy it. I put it back on the shelf and went to walk around the beach and harbor at North Berwick. After an amazing afternoon birdwatching and wandering around in one of the most beautiful landscapes I have ever been in, I returned to the Scottish Seabird Centre, made the final decisions on what gifts I would buy, and decided to buy Looking at Birds, too.

From a pragmatic standpoint, I definitely did the right thing. After I got it home, I realized that if I wanted to buy it in the US, I would still have to pay the $25 and either pay $3.99 to have it shipped from an Amazon seller, or god-knows-how-much to have it shipped directly from the publisher in the UK.  But even before that, as I sat on the train back to Edinburgh, I saw that my first impressions of Busby’s book were shallow and unconsidered. Perhaps after a day of birdwatching and silent contemplation in a beautiful landscape prepared me to appreciate his work when I took a second look.

Busby’s drawings are not sketchy or half-finished, although they may seem so at first glance. His drawings are arealive. Looking at Birds includes virtually no instructions on how to draw birds, and doesn’t even explicitly recommend drawing birds as a way to observe them, but it doesn’t need to. Busby captures them preening, bathing, greeting, fighting, fleeing, and hiding with an immediacy that’s difficult to capture–even with photography or video. His drawings are punctuated with commentary that is a testimony to his many years of observation. For instance, “A Raven can even fly on its back keeping it s head at its normal angle. I have never seen one roll over completely: they always roll back the same way.” (53) “So far I have not seen a Swift preening on the wing; perhaps they never do, but I am looking out for it.” (28)

The question with Looking at Birds is: why is an antidote to field guides needed? Busby points out–and I will be the first to admit to being guilty of this–that some birders tend to look at a bird long enough to identify it and then move along. It’s almost as if when you know what to call a bird, there’s nothing else you need to know about it. Field guides are wonderful tools for identification, but if used improperly, the process of identification becomes a stand-in for real observation. And what do we miss if we don’t actually observe birds? Almost everything interesting and delightful about them: their movements, habits, behavior, relationships.

The one criticism I have of Looking at Birds is the layout, which to me, since I have an eye for book design, leaves a lot to be desired. The book feels more like a long Microsoft Word document with pictures inserted rather than a book that’s been laid out page by page. This is a pretty minor quibble though, and doesn’t detract from enjoying the words or pictures themselves. The layout of Drawing Birds, done up by a bigger publishing house, is a lot more satisfying.

After I returned to the US, I checked Drawing Birds out of the library and was just as impressed with it. WhileLooking at Birds features only Busby’s artwork, Drawing Birds contains work from Busby and a number of others, living and dead, to give you a wide range to techniques and styles. (The open-book photo I took includes only drawings by Busby, though. I didn’t want to run into any potential copyright problems.) I had run out of renewals on it–after renewing it 7 times!–and had to return it. And now thanks to my husband, I will always have my own copy around for reference.

If you are interested in birds, bird behavior, or wildlife art in both its most raw and most masterful form, I highly recommend Busby’s Drawing Birds and Looking at Birds. My copies remind me both of my husband’s kindness and a special day I spent in Scotland, but even without the personal associations I consider them to be treasures.