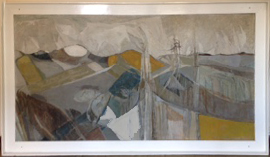 I recently came across archive material relating to this big picture and others that John Busby painted in those early years. In my grandfather’s scrapbooks dating back to the 1950’s were newspaper cuttings and exhibition programmes, receipts and letters relating to his son’s early career– a fascinating glimpse into the different world that is time past.

Twelve Winded Sky was first shown in the newly restored Fountains Hall in Bradford about 1956. This was a venue promoted at the time as, ”an established rendezvous for Luncheons, Dinner Dances, Whist Drives, Wedding Parties… and all similar functions where First Class catering is essential” It was also part of the Busby family’s department store and in his memoirs John’s father wrote, “ A feature of the building was its magnificent interior walls and one day as I stood gazing around I knew instinctively that what they needed were important pictures – it was more than a coincidence, I suppose, that John was an art student at the time. As one thing led to another canvasses started to appear at Fountain hall and my eyes were opened to the world of contemporary art”

A huge mural by John was commissioned for the balcony above the ballroom. This was 16 foot by 8½ foot (4.9m x 2.5m) and described in a gushing newspaper article at the time as contributing “to the furnishing and warmth without predominating or detracting from the general décor. This it does, for although the subject of the picture is not immediately apparent, the colours and composition are restful and pleasant and blend well with the rest of the hall. A kaleidoscope of colour, there are many pictures in this one sweeping impression. One part depicts a field, another a valley. There is the foot of a glacier at one side, while a profusion of life and gaiety blends the whole into an exciting composition.” The article concluded, “These contemporary murals add greatly to the décor of the hall and even if one does not at first understand them, their charm must be appreciated.”

Twelve Winded Sky, a (relatively) smaller work at 4’8” x 8’8” (1.4 x 2.7m) was displayed in the Fountain Hall Lounge (seating capacity a mere 150). In the article, under the subheading ‘A Poem in Colour’, it was described as being “most striking… an effort to illustrate A.E. Houseman’s poem A Shropshire Lad. The impression of high wind in down country at harvest time is well conveyed in this impressionist landscape”

Another newspaper report commented , “This young painter, who seems quite at home with painting on the large scale, certainly has a distinctive style in which a gift for sweeping design repeatedly displays itself.”

A year later in October 1957 John Busby was invited to exhibit at the third biennial “modern art in yorkshire” exhibition at the Wakefield City Art Gallery. This was a great success with six of his paintings and drawings sold. Three to individuals, two to the Leeds Corporation Schools Service, and Twelve Winded Sky to the West Riding County Council for the newly opened Don Valley High School in Doncaster. It cost £52 and 10 shillings. (50 guineas – I expect the shilling in the pound was the gallery’s commission – 5%!)

That the painting was appreciated is noted in a letter from the West Riding Educational Dept. some four years later. While asking about the possible purchase of further paintings for their schools, the Senior Art Advisor (signature illegible) commented “You may know that in 1957 one of our schools: Don Valley High School, purchased your painting ‘The Twelve Winded Sky’ which we like very much.” The letter then goes on to request that two or three paintings could be sent (by passenger train) for the Department to select one for purchase. The letter also mentions that “There is some urgency about this matter as we have a little money which if not spent by 31 March, we will lose.”   Those were the days!!

Read the original posting about the recovery of this painting.