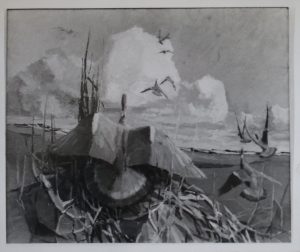 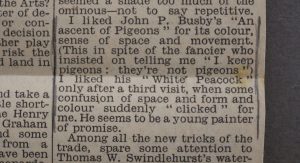 “I keep pigeons: they’re not pigeons”

I found this black and white photo in a scrapbook alongside a newspaper cutting of an exhibition. The reviewer liked the picture ‘for its colour, sense of space and movement. (This in spite of a fancier who insisted on telling me, “I keep pigeons: they’re not pigeons”).

Sadly there was no date attached to the newspaper cutting but it is obviously an early work of Dad’s.

Then I discovered another scrapbook which solved the mystery in a most delightful way. This had a newspaper cutting which reviewed the Open Air Exhibition being staged by the students of Leeds College of Art in the Civic Hall Gardens in the summer of 1952, and there in the book was a photo of Dad sat next to his picture.

The final piece of this story comes from a rummage in a forgotten corner where I was delighted to find the picture itself. As it wasn’t sold, it looks like the balance of Yorkshire opinion at the time was with the fancier!