Animals and other wildlife 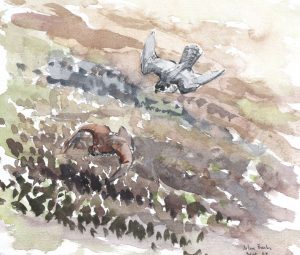 P  is for… Pochard, Peregrine chasing Red Grouse and Puffins on Fidra A winter visitor, the pochard  feeds on seeds, waterweed, snails and other aquatic invertebrates below the water’s surface, so quite appropriately seen here underwater. The peregrine is very much a bird of the air. This one is an illustration in Lines from Nature […] 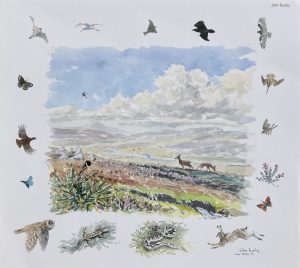 £50 each +p&p    37 x 41 cm unmounted. There are quite a few architects’ plan drawers in the studio. Wide and shallow they could hold enormous sheets of paper and are ideal for the sketches and unmounted original  watercolours they hold now.  Every so often I delve into the drawers and emerge with some […] 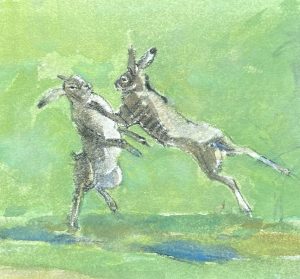 In his book Lines from Nature, John wrote, “Boxing hares in spring present a challenge to catch the movement. Often they are too engrossed in their rivalry to be alarmed by a watcher. Hares seem so much more alive and intelligent than rabbits, or is that just my prejudice against the pests that invade our […]

Chamois, the delightful goat-antelopes found in European mountains from the Pyrenees to the Caucasus.  These pictures came from a visit to Les Ecrins National Park in south-eastern France in April 1996. In his book Lines from Nature John wrote, “Snow fragments make precise shapes against the darker colours and textures of the screes, yet they […]