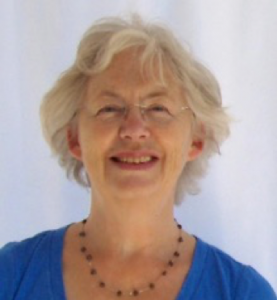 JOAN BUSBY was born in Yorkshire and is a science graduate of Edinburgh University. She studied singing with several inspiring teachers, notably Edna Hall (in Middlesbrough), Ena Mitchell and Laura Sarti, with coaching from Paul Hamburger. She made her first broadcast for the BBC at the age of 14. Later she sang with Scottish Opera and the John Currie Singers, with the Hill Square Consort and with Trio Felice, for BBC Radio and for STV, in oratorio and in many concerts. Retired now professionally, she continues to sing in concerts for friends and charities.

Joan teaches singing both privately and at Edinburgh Napier University, and also at the prestigious Oxenfoord International Summer School for Singers and Accompanists. Her teaching is based on Bel Canto technique with insights from Estill Voice Training and Core Singing. She aims to encourage beauty of tone and line, lively expression and for the singer ease, freedom and enjoyment.

As Director of Music is Pleasure Joan devised themed programmes for special venues, including the National Gallery of Scotland, the Royal Botanic Garden, Edinburgh, and the Tate Gallery in London.

She initiated and became Festival Director of the Handel at Hopetoun Festival, with its memorable production of the opera Rodelinda, with Rebecca Evans and Michael Chance.

Joan was a founder and for many years Administrator and Director of Music at Oxenfoord/  Oxenfoord International Summer School.

She also produced an interactive CD Tutor for Singers – 10 Faure Songs, under the label Master Singer. This featured piano accompaniments played by Malcolm Martineau, the French texts spoken by Michel Vallat, and translations and performance notes. Alas, the rapid development of computers has made it impossible now to use the CD as a programme, although the accompaniments and spoken poems can be played on an audio CD player.

Songs of the Hebrides – the adventurous life story of Marjory Kennedy Fraser, illustrated by some of the many lovely songs from the Hebrides which she collected, arranged and published. First given at the National Portrait Gallery of Scotland, this programme has been performed many times as far afield as New Zealand.  A special ‘Dreamcoat’ was made for it by the designer Fiona Fraser, of painted silk, featuring references to the portrait of Marjory Kennedy-Fraser by John Duncan which hangs in the Gallery.

Now the Hungry Lion Roars – a menagerie of songs and poetry celebrating birds and    animals and insects. Next performance August 7 2019 at the Edinburgh Festival Fringe.

Songs of the Hebrides  16 songs : available as CD and to download as album or individual songs.

Now the Green Blade Riseth: Hymns and songs for the Christian Fellowship of Healing, Edinburgh.